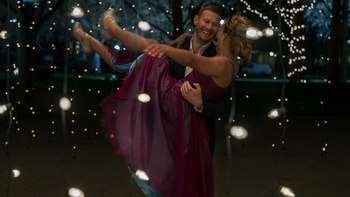 Everybody's dancing in the moonlight
"Who the hell is Harold Jenkins?"
— Diego

"The Day that Wasn't" is the sixth episode of The Umbrella Academy's first season.

Luther convenes the siblings to discuss the impending apocalypse, but Klaus, Diego, and Allison are reluctant to step up. Vanya, who walks in on the meeting after having spent the night at Leonard's, assumes she has been intentionally excluded and storms off. After realizing that Reginald never looked at the correspondence Luther sent from the moon, Luther is shaken, and spends a heartfelt afternoon and evening with Allison.

Cha-Cha is ordered to terminate Hazel while Five arrives at the Commission for his first assignment as a case manager. The Handler gets in the way of his attempts to find out more about the apocalypse. Klaus enlists Diego's help in staying sober enough to contact Dave. Meanwhile, Vanya finds her father's notebook in Leonard's things and learns that Reginald was suppressing her powers, while Diego accompanies a revived Grace to the park. Following an altercation with the Handler, Five jumps back in time to Luther's meeting earlier that day. He orders his siblings to get their act together, convinced that protecting a man named Harold Jenkins is the key to allowing the apocalypse to happen.