Recap / The Twilight Zone S2E42 "The Eye of the Beholder" 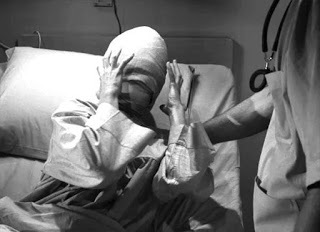 Once unwrapped, she'll enjoy a nice Tomato Surprise.
Rod Serling: Suspended in time and space for a moment, your introduction to Miss Janet Tyler, who lives in a very private world of darkness. A universe whose dimensions are the size, thickness, length of the swath of bandages that cover her face. In a moment we will go back into this room, and also in a moment we will look under those bandages. Keeping in mind of course that we are not to be surprised by what we see, for this isn't just a hospital, and this patient 307 is not just a woman. This happens to be the Twilight Zone, and Miss Janet Tyler, with you, is about to enter it.
Advertisement:

A woman, Janet Tyler, is confined in a hospital, her face wrapped in bandages as she awaits the outcome of an operation. This operation, the last allowed after multiple experimental treatments for her condition, is the only thing that might allow her to live in normal society, rather than being sent to a village of "freaks".

The Tropes of the Beholder:

Rod Serling: Now the questions that come to mind: "Where is this place and when is it?" "What kind of world where ugliness is the norm and beauty the deviation from that norm?" You want an answer? The answer is it doesn't make any difference because the old saying happens to be true. Beauty is in the eye of the beholder. In this year or a hundred years hence. On this planet or wherever there is human life, perhaps out amongst the stars. Beauty is in the eye of the beholder. Lesson to be learned in the Twilight Zone.