Recap / The Dark Crystal Age of Resistance S1E3: "What Was Sundered And Undone" 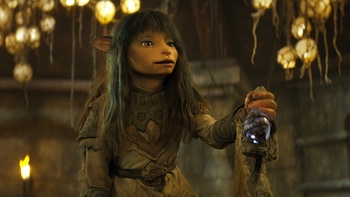 Deet and Hup find themselves unwelcome in the Stonewood clan's village, with Hup arrested while defending Deet's honor. Deet is denied an audience with Maudra Fara to appeal for Hup's freedom, while Fara and Ordon attempt to capture Rian before he escapes them. Rian and Deet encounter each other after nightfall, with the latter inspired by Rian with a scheme to free Hup. Meanwhile, as skekSil provides skekTek with Gruenak slave assistants the mouths of which he stitched shut, Aughra arrives at the Castle and learns of the Crystal's corruption before the Skeksis order her removal. Brea is sent to join the Order of Lesser Services for one year as punishment for the diplomatic incident she caused by wiping out Cadia's memories. Brea escapes the Order while they are cleaning Podlings, encountering Tavra who reveals that their mother sent her on a mission to retrieve Rian. She then returns to Ha'rar and acquires her mother's brightest jewel for Onica—an Imperial Unamoth chrysalis. With Onica's guidance, Brea asks the chrysalis for answers and follows the newly emerged Unamoth to a secret passage beneath her mother's throne.