Recap / The Dark Crystal Age Of Resistance S1E4: "The First Thing I Remember Is Fire" 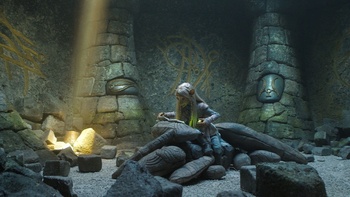 Deet frees Hup from the Stonewood clan's dungeon by pretending to be a monster that scares the guards, using her luminescent moss from the Caves of Grot to great effect. In Ha'rar, Brea attempts to decipher the hidden chamber's riddle before realizing it reveals the Gelfling clan hierarchy to be false while awakening a stone golem that plays a recording on its body to talk to her. The voice introduces the giant as Lore and explains that he will guide her to the Circle of the Suns, attracting the attention of Brea's oldest sister Seladon. Meanwhile, Aughra encounters urVa the Mystic Archer, who advises her to learn from Thra to restore her connection to the planet. At the same time, the Skeksis' banquet in honor of skekEkt's return turns sour when Emperor skekSo replaces skekSil the Chamberlain as his advisor with skekVar the General. This leads skekSil to summon skekMal the Hunter to retrieve Rian. As skekVar and skekZok leave to recruit "volunteers" from the Gelfling tribes, skekMal finds Rian after he dreamfasted the truth to Tavra, Ordon, Gurjin's sister Naia, and Kylan. skekMal survives Ordon's sacrificial attempt to stop him with ravenous Gobbles and then runs off with Rian as Deet and Hup watch powerlessly.