Recap / The Dark Crystal Age Of Resistance S1E2: "Nothing Is Simple Anymore" 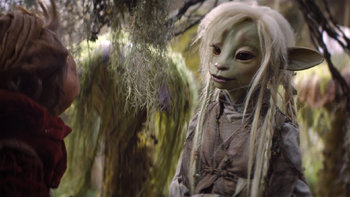 As Aughra awakens upon sensing a calamity on Thra, Deet experiences the surface before gaining a traveling companion in the Podling Hup, who fancies himself a paladin who will protect her, as they journey to Ha'rar. There, Brea visits Elder Cadia of the Sifa Clan for help deciphering the symbol's meaning. Cadia instead attempts to wipe out Brea's memory by having her drink powdered nulroot... only for her to switch the drinks at the last second, rendering him amnesiac instead. Cadia's apprentice Onica offers her services if Brea brings her the All-Maudra’s brightest jewel by tomorrow night. Back in the castle, labeled a murderer, Rian uses dreamfasting to reveal Mira's death to their friend Gurjin. The two then resolve to steal the vial of Mira's essence as additional proof of the Skeksis' misdeeds. The two manage to acquire it when skekTek catches skekSil stealing it, but the two Skeksis capture Gurjin while Rian escapes with the vial. skekTek reports this to skekSo before skekSil spins the story so that the scientist is blamed for Rian's escape instead. The Crystal Guard are sent after Rian, and skekTek is subjected to an eye-gouging peeper beetle as punishment.