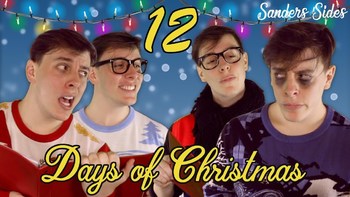 It's Christmas, and Roman and Patton feel in the mood to do a video. Logan suggests that, given the time of the season it is, he should do something special. Roman and Patton reveal what they've been working on: they've been making ugly sweaters for all of the Sides. Then they all join in to perform a Christmas carol, their own version of 12 Days of Christmas where they'll remember everything they did together for the past previous year.