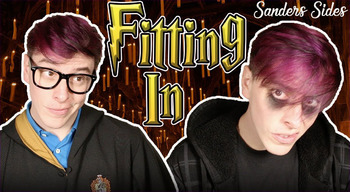 Thomas has just dyed his hair purple and the Sides show up to tell him their opinion about it. Logan hates it, while Patton loves it. For Roman it gives him new oportunities for his selfies. But when Virgil finally shows up, he says that he has his concerns, specifically that standing out like that can make Thomas be seen as "the odd one out". Roman points out that he has that concern because he has been feeling like the odd one out himself for a long time. Thomas has the idea of sorting him, and by extension the rest of the Sides in the Hogwarts Houses from Harry Potter, to make Virgil feel more integrated in the group. So the Sides start examining themselves to see in which house each of them fits in better.