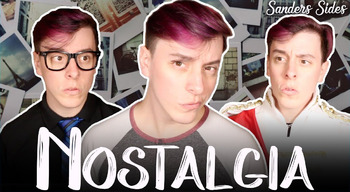 Thomas is feeling in a really sad mood because he's reminiscing about his first love, with whom he had a rough break-up that is still hurting him despite happening months ago. Looking for a way to cheer him up, Logan has the idea that indulging in nostalgia and in good memories of the past could inspire him hope for the future. In order to do that, Thomas and the Sides travel to Patton's room which is full of items of Thomas' past, like his old toys, his text books from college, old poems he wrote, trophies he won for his work in theater. When they have been them for some time, Virgil suddenly starts feeling bad, like on the verge of having a panic attack, and Logan realizes that it's been a mistake getting into Patton's room, but neither Thomas nor Patton and Roman want to listen to Logan when he tells them that they must get out of there quickly, so mesmerized they are by the memories of the past.