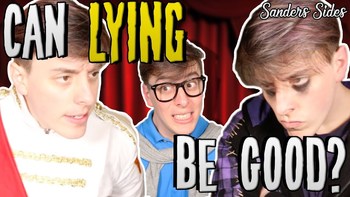 Thomas has missed an important reading his friend Joan was doing for a show because he was spending the night on a date with a cute guy he had just met. It's the next morning now and Joan has texted him "Where were you last night, F-Word face?" Now Thomas is afraid of Joan's reaction to the truth and fears to confess it to them, and at the same time he's afraid of lying to Joan and being caught in the lie. Roman suggests that maybe he only needs some practice into lying. Patton suggests to make a stage show where they'll portray different lying scenarios where Roman will impersonate Joan, so that Thomas, with the help of Logan's data, can learn all the types of lies that exist and practice how to convincingly lie to Joan.