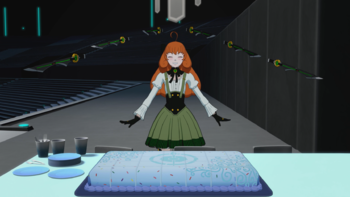 Penny's rather... unorthodox method for cutting cake slices.
Written by Eddy Rivas
Directed by Paula Decanini & Dustin Matthews
"With the threat of Salem still out there and tensions rising in our kingdom, I certainly could use more trustworthy fighters by my side."
— General James Ironwood

Riding the high of completing their first mission in Atlas, the gang is itching to hone their skills and provide some much-needed help to the citizens of Mantle.