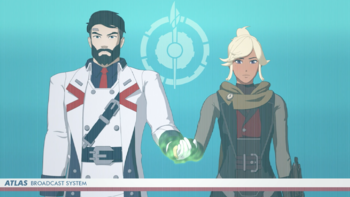 "Instead, we must unite, and fight back, together. Every single one of us!"
Written by Kerry Shawcross & Kiersi Burkhart
Directed by Dustin Matthews & Connor Pickens
Yang: Those shelters are gonna fill up soon.
Elm: They're all we've got. We just have to hold off the Grimm.

The truth is finally out, and it's not only our heroes who take notice. With everything at stake, it's all hands on deck to protect the City of Mantle.

"At the risk of sounding cliche, James... I won't be going down without a fight."