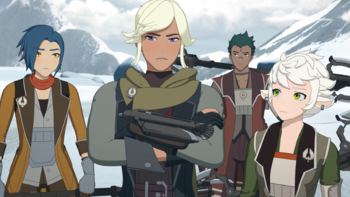 Pictured: Robyn Hill and her Happy Huntresses.
Not pictured: Any shred of happiness in this situation.
Written by Eddy Rivas
Directed by Connor Pickens
"We can’t fix the wall without the supplies on these trucks. I think Mantle deserves to know what they’re being used for."
— Robyn Hill

Between missions, training, and rising political unrest, these fledgling huntsmen and huntresses have quite a lot on their hands.

"I think Father may have just provided the spark that’s going to set this kingdom on fire."