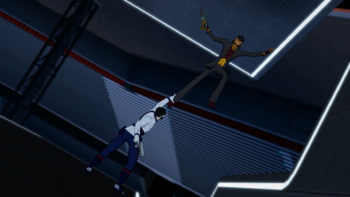 It seems Watts cannot understand the gravity of the situation. But in a way, he has the high ground, as the episode's events will come to show.
Written by Miles Luna & Kerry Shawcross
Directed by Paula Decanini & Kerry Shawcross
Ironwood: I will sacrifice whatever it takes to stop her.
Watts: I hope you do, James. I hope you do.

Between Watts, Tyrian, and the seemingly endless swarm of Grimm, evil is encroaching on our heroes from all sides. The biggest threat, however, may be hiding where they least expect it.

Ruby: We won't just let you take us.
Ironwood: I know.