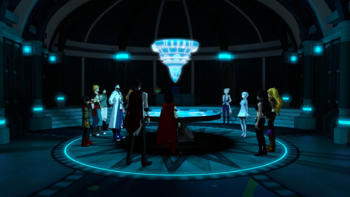 "Amity was built to bring the nations together, and it will serve that purpose once again."
Written by Kiersi Burkhart
Directed by Connor Pickens
"Ozpin believed the best way to fight Salem was to do so in secret. Whether that was the right choice or not isn't for me to say. But we find ourselves in a position of needing, well, a new approach."
— General James Ironwood

Arresting people isn’t exactly the best way to make a first impression. However, once the initial shock has worn off, Ruby and her friends learn there’s a lot more to these Ace Ops - and even General Ironwood - than first meets the eye.

"Well, I suppose we all have our talents."