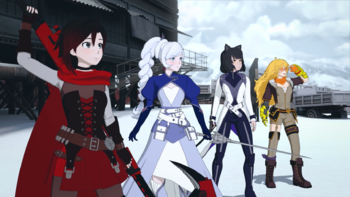 With new threads and weapon upgrades, team RWBY is ready to save the day.
Written by Miles Luna & Kerry Shawcross
Directed by Kerry Shawcross
"Our mission today is to secure the launch site for the Amity Communications Tower. The designated area is an abandoned Dust mine. Since its closure, the Grimm have moved in."
— Clover Ebi

Out in the snowy tundra, the Ace Ops show teams RWBY and JNR the ropes.

Forest: Who are you?
Tyrian: Me? Oh, well, I'm… someone just like you. Someone who... wants to mix things up around here.