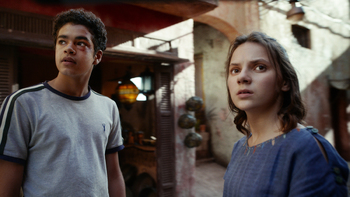 Lyra and Will independently explore a new world, and end up meeting in the mysteriously "deserted" city of Cittàgazze. The Magisterium take action on past events. Mrs. Coulter interrogates a captured witch. Lee Scoresby embarks on a mission to locate Stanislaus Gruman. Serafina calls a meeting of witches, and is met by witch Queen Ruta Skadi.