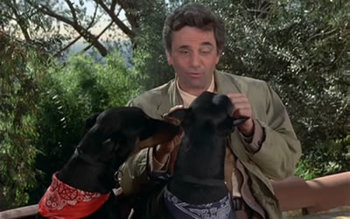 "How to Dial a Murder" is the fourth episode of the seventh season of Columbo.

Dr. Eric Mason (Nicol Williamson, faking an American accent) is a wealthy self-help guru whose classes seem to largely involve being mean to the people who sign up. While he teaches self-control, Dr. Mason's personal life isn't very controlled. His wife, who died under mysterious circumstances six months earlier, was cheating on him. And she was cheating on him with his friend and colleague, Dr. Charlie Hunter.

Mason comes up with an elaborate murder plot involving his two pet Dobermans, Laurel and Hardy—Mason's a movie buff. He trains the dogs to attack when they are given the verbal command "Rosebud"—Mason's a big movie buff. Mason arranges for Hunter to be at Mason's house, then places a phone call. When Charlie answers Mason coaxes him into saying "Rosebud". The dogs kill Charlie, the only witness being Mason's live-in assistant, Joanne Nichols (21-year-old Kim Cattrall) who is too late to save him. Unfortunately for Mason the investigating officer is Lt. Columbo, who immediately starts noticing odd details, like how the other house phone was unplugged (the dogs could only access the kitchen), or how the dogs seem awfully nice and friendly for two wild animals that just killed a man...