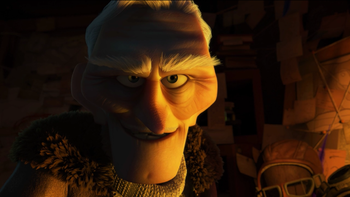 "An old man taking his house to Paradise Falls... that's the best one yet. I can't wait to hear how it ends.“

While Up is an adventure film about Carl Fredericksen going to South America to fulfill his wife's dying wish of having an adventure, there are some frightening moments, even for a Pixar film that's Lighter and Softer than its predecessor.