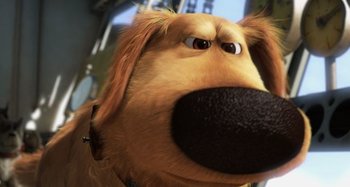 "Listen you dog. Sit!"
"I don't mean to keep beating that horse, but it bears repeating: Carl Fredrickson, cartoon caricature of a seventy-eight year old balloon salesman, is here a more effective and involving action hero than Wolverine, Captain Kirk, and John Connor all rolled into one."
- Moviebob, 'Up' review