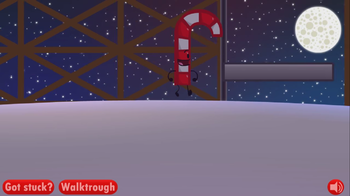 Just a candy cane walking around in the snow collecting presents. That's all.

The player controls Candy Cane, one of the characters in Challenge to Win, and must collect the present in each level. The game managed to score a sequel, Candy Canes New Years.