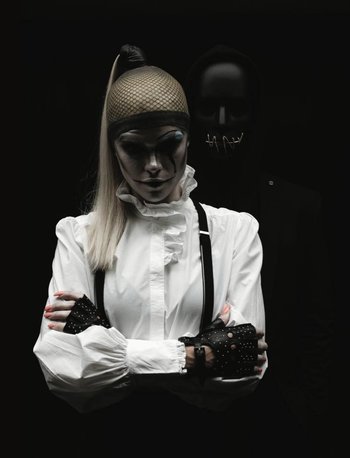 They seem nice.
I want to taste you on my lips,
Tear you into bits,
I hate you.
I want to get under your skin,
Tear you limb by limb,
I love you...
- "Katherine Knight"
Advertisement:

SKYND are a gothic industrial electronica band. Their lyrical content is entirely centred around True Crime, focusing on serial killers, cult leaders, or mysterious cases. Since emerging in 2018 with their debut single, "Elisa Lam", the band have quickly gained a rapid following for their experimental blend of Industrial Metal, EDM, Dark Wave, and Goth Rock, their extremely dark music videos, and their unique horror-tinged look.

They are also known for their heavy theatricality, adopting personas straight out of a horror movie to conceal their true identities from the public, and pushing the focus onto the music instead.

They have released 2 EP's, Chapter I and Chapter II, with Chapter III announced in October 2020.