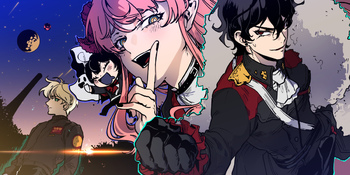 Cecil and the "Demon King"

The king of Devildom, the demon empire, has died but the citizens can't know that. The king's second in command and commanding General and Chancellor, Cecil has replaced the king with an impostor human named Merlin. Merlin doesn't exactly want to oversee the massacre of all humans but he has to if he ever wants to see his brother, Noah, again.

is a fantasy Korean Webcomic created by Moo Men.