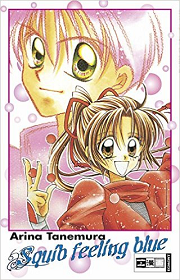 A manga volume that collects four of Arina Tanemura's stories into it, also known under the name Kanshaku-dama no Yuu'utsu which was translated into Squib Feeling Blue.

Squib Feeling Blue is a two-chapter story about the female ninja Kajika, who attempts to live a normal life and impress her crush, all while keeping her being a ninja a secret, with varying success. A rivalry with the Hayato ninjas leads to Kajika getting her heart broken, only for her to begin feeling nervous around her childhood friend Yuga.

This Love's Non-Fiction about Karin and her friend Yuri, with a whirlwind romance starting, when Karin poses as Yuri when meeting a pen-pal.

Romance Heroine In The Rainy Afternoon revolves around Minori, who uses rainy weather as an excuse to share an umbrella with her major crush, Takato. Then she finds out that he actually hates girls, so why was he so nice to her?

The Style Of The 2nd Love is a reprint of Arina's debut work. Mana has a crush on her best friend's boyfriend, all while being accosted by the school's resident playboy Nakamura.