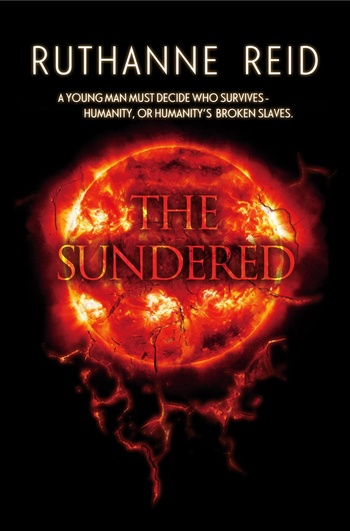 The world I know is flooded. The water's black. You don't go in the water. You don't touch it. If you do, it will get you, drag you down, and you're gone.
—Harry Iskinder

The Sundered is a 2012 sci-fi dystopian novel by Ruthanne Reid.

The world is flooded, and the water eats people. The only way humans survive is by forming psychic bonds with the deranged mutants called "The Sundered Ones." But using the Sundered kills them, and the creatures are treated worse than slaves. Harry Iskinder is a boy with a legacy—his family builds maps and searches for "The Hope of Humanity," which supposedly can save the planet. When the story opens, he has spent years with his fellow Travelers as a run-of-the-mill scavenger, but everything changes when he finds and binds two Sundered Ones in one day, one of whom seems to be more than meets the eye. Much, much more.

The Sundered contains examples of the following tropes: