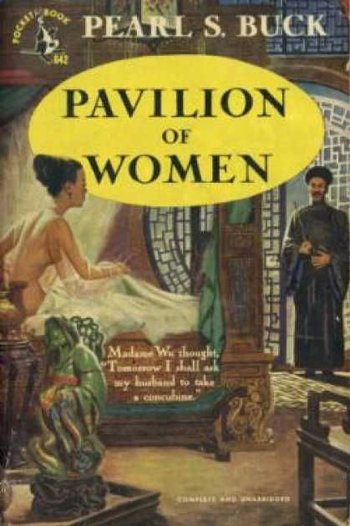 Pavilion of Women is a novel by Pearl S. Buck.

The protagonist is Madam Wu, an aristocratic Chinese lady at the head of a large and influential family. Her husband is a self-indulgent but well-meaning man she twists around her little finger and her aged mother-in-law was long ago relegated to an honorable retirement. Madam is regarded by all, including herself, as an ideal woman; beautiful, dutiful, fruitful and accomplished. She believes herself to be a model wife who loves her husband, a good and affectionate mother to her sons and a just and impartial mistress to her many servants. The 'just and impartial' is true enough but in fact Madam Wu is an arrogant, self-centered woman who loves nobody. Her self-realization and evolution into a warmer, better, genuinely good woman is the theme of the novel.

The plot kicks off with Madam Wu's long planned for fortieth birthday which she uses as an excuse to finally detach herself completely from the burdensome responsibility for a family she does not love. Her detachment from her husband requires the purchase of a concubine, a healthy peasant raised girl Madam names Ch'iuming. Unfortunately the new concubine and Madam's third son Fengmo accidentally catch a glimpse of each other and Madam decides to head off any scandalous results by quickly marrying Fengmo off to the young daughter of her friend Madam Kang.

However Linyi is a modern young woman who has been to a Western school and wants a husband who can speak a Western language thus Madam Wu comes to invite a European priest, Brother Andre, into her home to teach her son. To make sure he does not not teach Fengmo anything she would disapprove of Madam sits in on their lessons and soon Andre is teaching both mother and son much more than mere languages. Under Andre's influence Madam Wu finds herself doing astonishing and unconventional things like sending her third son abroad to study, inviting a concubine chosen by her husband not herself into their home, taking her unloved second daughter-in-law under her wing and plunging to her elbows into the blood and mess of a difficult childbirth to save the life of her friend Madam Kang.