Literature / An Age of Miracles 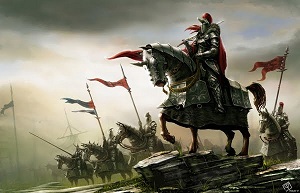 A modern rendition of The Dragon and his Knights by Gottfried Liss, painted in 1499.
"Blessed are we above all men, for we live in an age of miracles."
— John XII Cosmas, Patriarch of Constantinople, August 29, 1300.
Advertisement:

An Age of Miracles: The Revival of Rhomaion is an Alternate History series being published at AlternateHistory.com. The main point of divergence is the birth of a healthy young Theodoros II Laskaris

, who does not inherit epilepsy from his father; as a result, he is able to quickly reunite the successor states to the Byzantine Empire in the aftermath of the chaos caused by the Fourth Crusade. There is at least one other known point of divergence, in the form of difficulties encountered by Charles of Anjou in the conquest of Italy.

. Edited and finalized sections of the narrative are published here