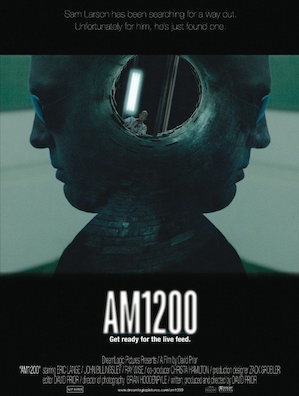 Get Ready for the Live Feed.
Jonah Henry: There's a kind of freedom when you don't have a choice.
Advertisement:

AM1200 (2008) is a cosmic horror short film (39 mins.) written and directed by David Prior. It stars Eric Lange, John Billingsley, and Ray Wise.

Sam Larson (Lange), an investment analyst, is on the run after being involved in a financial scam. He becomes haunted by an evangelical radio station and confronts a power beyond his imagination.

AM1200 was officially released at the H.P. Lovecraft Film Festival on October 3, 2008, and won The Brown Jenkin Award at that same festival.

AM1200 contains examples of: