"Embrace the spirit of Romanticism." 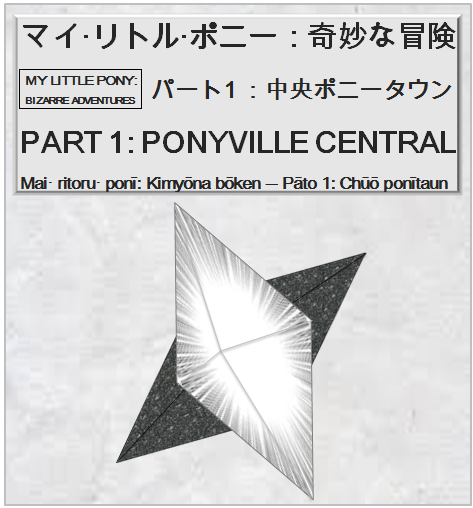 An Pony filled Adventure of the Bizarre Variety....

is a My Little Pony: Friendship Is Magic Fan Fiction which takes place in a Jojos Bizarre Adventure-inspired universe. Currently Part 1 "Ponyville Central"

is finished and published with parts 2 and 3 outlined and forthcoming.

On the one-thousandth year of Nightmare Moon's Banishment, Celestia draws upon the reality-bending power of the Red Stone of Aja to purify her sister's evil. However, a magical accident causes the stone to explode scattering it across Equestria in the process. In order to recover the stone and search for her sister, Celestia sends her prized student Twilight sparkle to recover the fragments of the Red Stone of Aja.

Thus begins Twilight Sparkle's epic quest to discover the mysterious powers of Stand with her newly made friends. Bound together by the Power of Friendship they struggle to overcome heated enemies and decipher the mystery behind the Red Stone of Aja.