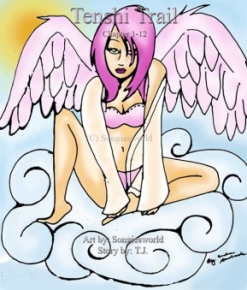 The "cover" for the first story, featuring Sakura
See you in space, tenshi

Tenshi Trail is a series of fanfics written by Noizchild

. While the series is stated to take place in the 'Cowboy Bebop universe, it has a noticable Shoujo feel to it and borrows elements heavily from CLAMP's works, most notably Wish and Chobits.

The series is planned to be 4 stories long. So far, only the first story has been completed and the second is being written. The stories are:

A website for the series can be found here