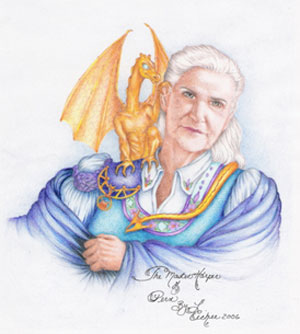 Anne Inez McCaffrey (1st April 1926 - 21st November 2011) was a prolific sci-fi/fantasy writer of over one hundred novels, short stories and compilations. Best known for the Dragonriders of Pern series, she also authored several other popular, long-running series. Those include:

McCaffrey's best known compilation of short stories is probably The Girl Who Heard Dragons; notable not only for the title story (which was eventually expanded into The Renegades of Pern), but for a 1956 speculative fiction story that predicted surrogate pregnancy more than two decades before the first successful such birth.

Her writing—starting with the short novel Restoree—was lauded for its groundbreaking feminist attitudes. These may seem extremely subtle to young readers, but simply having a female protagonist in a science fiction story was novel at the time. Throughout her writing since, her female characters have become even more powerful and independent, proportional to the expectations of her audience.

As is common with many of the writers who arrived early to the science fiction genre, quite a lot of the tropes she explored for the first time in her writing have since been used ad naseaum by subsequent writing. For instance, telepathically bonded animals and Cat Folk were very new ideas when she began those series.

McCaffrey became almost as well known for her odd ideas regarding gay people as for her writing. In particular, she has stated a belief that any gay activity, particularly anal penetration, will make a man instantly and irretrievably gay (an idea first put forth in the infamous, but still unverified, "Tent Peg" interview and implied in her on-the-record "Renewable Air Force" interview). Ironically, in the last book of the Talent series she turns a previously exclusively gay character totally and apparently permanently straight for a Last Minute Hook Up with a female main character — can't leave anyone single, after all. Despite this, she has written at least two short stories involving men becoming pregnant, though both involve alien/fantastical females doing the impregnation: "Babes In The Woods" from her Get Off the Unicorn collection and "A Horse From A Different Sea". She also was a rather adamant defender of copyright and had a tendency to sic lawyers after any gathering of fanworks published, especially once the internet started taking off. This policy was relaxed later on.

In her later years, McCaffrey herself wrote mostly collaborations and largely turned over the continuation of the Pern series to her son, Todd. Pern, while originally being a high-fantasy story with some (very loose) science-fiction aspects, has recently undergone a metamorphosis, in which the original Pern colonists' landing site is discovered. While 'modern' Pern society has neither the capability nor the desire to return to the stars, they have embraced the technological aspects of the original 'Landing' settlement, becoming computer-literate fairly quickly and re-discovering much of the technology that was lost centuries before.

Works by Anne McCaffrey with their own pages include:

Other works by Anne McCaffrey provide examples of: