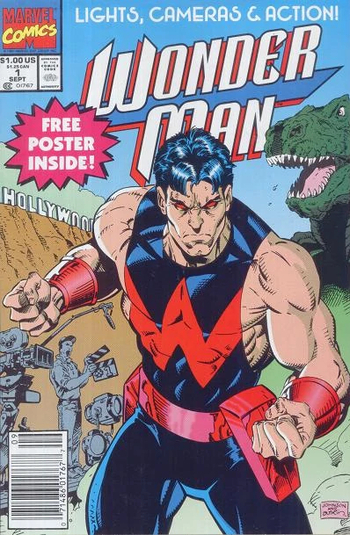 Lights, Camera & Action
"I know, blast it! But you don't know what it's like to die and come back. To be haunted by death... seeing any part of you alive makes you feel immortal. I can't have kids, you know — I'm just an ionic energy... thing. When your mind was based on mine, you were the closest I'd ever get to a son. And when she fell in love with your mind... I could feel a little closer to her."
— Wonder Man to The Vision, Wonder Man #8
Advertisement:

Wonder Man is a Marvel Comics character, created by writer Stan Lee and artists Don Heck and Jack Kirby, he first appeared in The Avengers #9 (October 1964).

Blaming Tony Stark for his company's troubles, Simon was about to be sent to prison when his bail was paid by Amora, the Enchantress. Temporarily free, Simon was faced with a proposition from Baron Zemo, the leader of the Masters of Evil: superhuman powers in exchange for destroying the The Avengers from within. Agreeing, Simon accompanies the Masters to South America, where he was granted superhuman strength and durability via Zemo's "ionic ray" treatment. Calling his creation "Wonder Man", Zemo has Simon test his strength against Amora's companion, Skurge the Executioner. Besting Skurge, Wonder Man was informed that the treatment that gave him superpowers also altered his metabolism. Without periodic doses of a special serum, Simon would die within a week. This was intended to ensure Simon's loyalty to Zemo, the only man who could provide the serum.

Arranging a staged battle between himself and the Masters of Evil, Wonder Man was successful in winning the Avengers over. After explaining his reliance on Zemo's serum, the Avengers attempt to cure him but are unsuccessful. Left with no choice but to remain loyal to Zemo, Wonder Man leads the Avengers into an ambush by the Masters of Evil. During the battle, Simon has a change of heart and helps the Avengers defeat the Masters instead, knowing full well that he was sacrificing his lifeline in the process. Proud of his choice, Simon succumbs to the treatment's deadly side effect and falls into a coma. Unable to find any life signs, the Avengers come to the conclusion that Simon passed away. Placing his body in suspended animation for the trip back to the United States, Iron Man creates a copy of Simon's brain patterns in the hope that one day they'll be able to revive him. The brain patterns were later used by the super-villain Ultron to create a personality matrix for The Vision, a synthezoid who would turn against his master and join the Avengers. Given Simon's history of having done exactly the same thing, this wasn't one of Ultron's smartest plans.

The character (as portrayed by Nathan Fillion, a frequent member of director James Gunn's production posse) was set to appear as a cameo in Guardians of the Galaxy Vol. 2, depicting a Simon Williams film festival with various In-Universe movie posters of him on them, but it was later cut from the film. It was later announced that the character would finally be debuting in the Marvel Cinematic Universe with a solo series on Disney+, this time portrayed by Yahya Abdul-Mateen II.

Wonder Man has appeared in the following works: