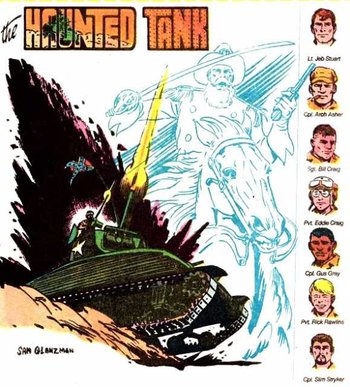 One of the most gonzo war comics to spring from the mind of Bob Kanigher, The Haunted Tank was the cover feature in GI Combat, and starred Jeb Stuart and the crew of his M3 Stuart tank — originally loader Arch Asher, gunner Rick Rawlins and driver Slim Stryker. Oh, and the ghost of Confederate General JEB Stuart, who's haunting the tank.

You see, Alexander the Great has assigned JEB Stuart to protect his namesake descendant fighting fascism, in order to atone for supporting slavery in The American Civil War. General Stuart's ghost doesn't care for the assignment, but Jeb's comrades impress him enough that he agrees to help if Jeb flies the Confederate Flag instead of the Union one atop the tank. Of course, Jeb's the only one who can see the General, but the rest of the crew go along with him, because crazy as he appears, he's a good commander. And so, the Haunted Tank makes its way through the World War II...

The original series artist was war comics legend Russ Heath, and later stories had art by the likes of Sam Glanzman and Joe Kubert.

The Haunted Tank provides examples of: