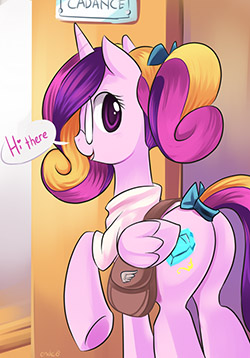 depicts a younger Princess Cadance as she responds to reader questions while dealing with Equestria High School and her not-so-secret crush on Shining Armor. Recognized for its high quality art work and cute interpretation of the character, the blog is rapidly gaining a following in the My Little Pony: Friendship Is Magic fandom.

This blog has examples of: