Western Animation / Scrub Me Mama with a Boogie Beat 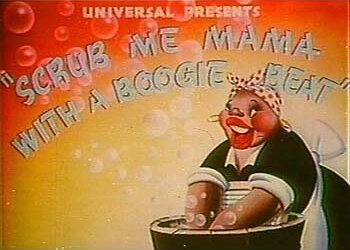 Rubbley-ub-dub!
Scrub me Mama With a Boogie Beat is a very... controversial short cartoon directed by Walter Lantz and released in 1941 by Universal Pictures.
Advertisement:

The short is set in Lazytownnote no relation, a community inhabited by extremely stereotypical lazy African-Americans. At least, until a light-skinned woman from Harlem arrives and shows them how to wash via the titular song.

The short is notable for being controversial even in The '40s for its African-American stereotypes, being yanked from circulation since 1949, following protests from the NAACP. It was the first cartoon to be pulled from circulation due to Values Dissonance, preceding the Censored Eleven by 19 years. Currently, it's in the public domain, and can be viewed here

This short contains examples of...