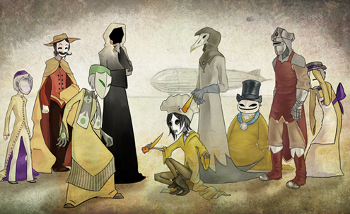 Masquerade is an Interactive Comic, created by ashdenej as an MSPA Forum Adventure; initially a text adventure, it also makes use of images and talksprites, Homestuck-style.

It follows the adventures of the Broccoli Gang, a group of shady individuals who are in the process of stealing a walrus for reasons unknown. Later on, the action moves into the Gang's blimp, and concerns the attempts of their prisoners to escape. The Gang are based off both the Seven Deadly Sins and the Horsemen of the Apocalypse.

This adventure displays the following tropes: