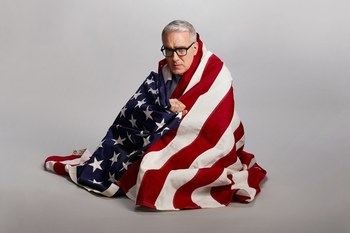 "Watch. This. Space."
"Every few generations, we Americans are called upon to defend our country. To defend it, not so much from foreign dictators, or war, or terrorism, but from those here who have no commitment to progress or democracy or representative government, no commitment to anything except their own out-of-control minds and the bottomless pits of their egos.
Our society has thrown up these people before. Joseph McCarthy. George Wallace. Father Coughlin. Jefferson Davis. Aaron Burr. The Know-nothings. The black-listers. The America-Firsters. And we have always thrown them out.

And now our generation has its own: the most dangerous individual ever nominated by a major party for the highest office in this country. His base wants few details and fewer facts; they just want to burn it down and blame their failures on the collective Other. And Donald John Trump is their demonic messiah in Oompa-Loompa's clothing. We must stop him. It is not pleasant, it is not fair that we have to do this, but it is our turn."

In early September of 2016, news commentator Keith Olbermann teamed up with GQ magazine to produce a series of 5-7 minute videos for their website, under the banner The Closer. The goal: to rally and direct support for the electoral defeat of Donald Trump in the 2016 election for President of the United States of America. Over the next eight weeks, Olbermann delivered 39 videos detailing both Trump's known transgressions and the potential for damage to the United States if he was elected.

Then Trump managed to win anyway.

A collection of show transcripts, Trump is F*cking Crazy, was released in October of 2017.

The Tropes with Keith Olbermann: