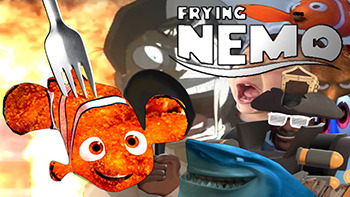 Fry it, refry it, pan fry it, deep-fry it, harder, better, faster, stronger!
"Rev up those fryers!"
Advertisement:

EmperorLemon presents The Frying Nemo Saga, a four-part YouTube Poop event that is a lengthy poop on Finding Nemo.

The saga loosely follows the events of the film; Marlin's wife Coral and the majority of his children are killed by a barracuda, and his only remaining son is named Nemo. When Nemo goes off on his first day of school, he's captured and brought into a dentist's fish tank in Sydney, Austrailia. What follows is his father's epic quest to save his son across the entire ocean…

Oh, wait. It's not that simple. While Marlin and Dory battle the horrors and oddities of the ocean, Nemo finds himself threatened by the approaching danger of The Gingering, brought upon by Darla's arrival in a few days. Throw in the Illuminati, a hungry Pumkin, a school of cyber-bullying fish, and the lingering question of how there can be fire underwater, and you've got yourself a lengthy, hilarious, and borderline Disney Acid Sequence ride of a YouTube Poop.

Can Nemo survive the coming apocalypse? Can Marlin and Dory survive everything on the Internet from burping Korra's to the belly of a great whale to a duck holding up a lemonade stand? Can someone please explain what the hell's going on? And will the viewers stop harassing Emperor Lemon to hurry up with the videos and realize he has a life outside of YouTube Poop?