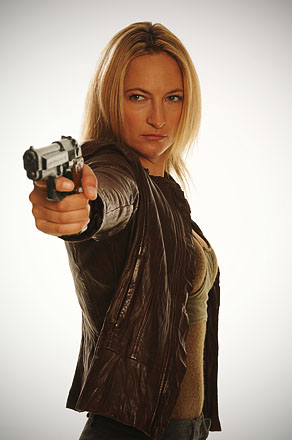 You really don't want to piss her off.
Franklin: Doesn't it ever get to you? You know, killing people?
Eve: No.
— Episode 1, "Edge"
Advertisement:

Angel Of Death is a web series created by Ed Brubaker about a ruthless assassin named Eve (Zoe Bell). Eve has no qualms about her work, until she receives an injury to the head...specifically a knife wound. It looks to be an awesome Roaring Rampage of Revenge, featuring lots of guns, death, and blood. You must watch it.

and begin your new life as a Zoë Bell worshipper.

You may also be looking for The Grim Reaper.