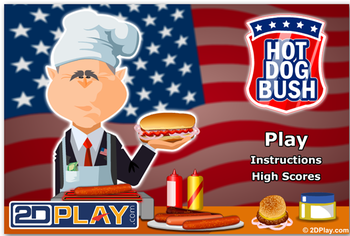 Hot Dog Bush is an iOS and online game developed by BigWig Media. The player controls George W. Bush after getting literally kicked out of the White House operating a street vendor to sell hot dogs and burgers.

Bush's vendor offers combo meals of a main course (hamburger or hot dog) served with fries and one soft drink. He can only cook 3 hot dogs at a time, 3 fries at a time and 2 hamburgers at a time. As the game progresses, customers will demand increasingly complex orders such as onions, ketchup or mustard on their hot dogs.