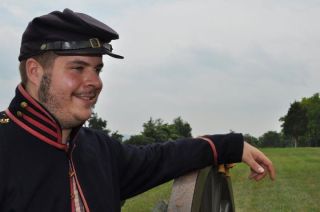 A boy and his 3in Ordnance rifle
"Great joy was expressed at our arrival and great things [are] expected from the Virginians and of consequence we must go through great fatigue and danger."
— Captain John Chilton, 3rd Virginia Regt, 1776
Advertisement:

Hotel Kilo is an amateur writer, college student, totally legitimate DJ on WCDE 90.3 FM former DJ that fell victim to a format change, living history interpreter, and all around strange fellow from the western part of the United States' Commonwealth of Virginia. A hardcore reader of TV Tropes for not even a year since he started college, it has quickly ruined his life. That was about the same time he began to be seriously interested in anime and manga (but more so manga since he is notoriously cheap and prefers reading anyway).

A life long history nut who can name all the US Presidents (first and last names) in order as well as all the states and capitals (and formerly possessed the ability to name every county in his home state), he plans to make it his career by gaining employment with the United States Park Service as a ranger or historian he successfully attained a position as an intern at Harpers Ferry National Historical Park in the living history branch. While his primary interest is in military (see below) history, his interests do tend to stray anywhere vaguely interesting. Other fields include industrial, medical, architectural, aviation, engineering, computer, mental health, and railroad history. Loves abandoned/decaying buildings and building models of obscure aircraft. Is an admittedly hopeless yuri fanboy... not the same way all guys are, he promises. Hotel Kilo has been known to express interest in such things as mysterious craft and the supernatural, particularly those related to his semi-native West Virginia; i.e. the Flatwoods Monster and Mothman.

A longtime Philadelphia Flyers fan, he is still mourning their loss to the Chicago Blackhawks in the 2010 Stanley Cup, but congratulates the 'hawks for winning totally over all that. Delighted to see the Bullies doing well in the Eastern Conference. There remains nothing but ill will directed at the Pittsburgh Penguins. Watches a lot of hockey regardless of living in the Pittsburgh television market, including the WHL. Other supported teams include West Virginia University athletics, trumped by the University of Iowa Hawkeyes in football, Los Angeles Dodgers (dating back to an age when he thought they were still in Brooklyn), Washington Nationals, and San Diego SUPERCHARGERS.

An Eagle Scout, he started as a Tiger in Cub Scouts and spent the next twelve years working his way to the top leaving him a cynical son of a bitch. One time Captain of his high school scholastic bowl team, he lead them to two district championships, a regional second place, and a disappointing finish in states partially due to outside forces. Hotel Kilo first started using the internet because none of his friends were nerdy enough to be into free form RPGs and the like while he was constantly dreaming up characters or concepts for adventures. He’s never looked back. Has too much time that extends to an obsession with the expanded universes of most series he watches (even if such a thing doesn't exist). Studies show that Hotel Kilo is a pretty chill guy who's more then willing to get along with/accept all sorts of folks. Except those who willingly spout incorrect historical facts.

May be troping too much now that he has looked up maritime case law to make an edit. Presently spends most of his time on the forums either in the RPG section or in forum games, but he is a regular reader of the Sky High Aviation Thread.

The username Hotel Kilo comes from the NATO phonetic alphabet, and is taken from a broadcast from the West German BNDnote Bundesnachrichtendienst numbers stations G16.

Hotel Kilo worked for the National Park Service at Harpers Ferry National Historic Park in the Living History branch throughout the summer of 2011 and will most likely be making a repeat performance in 2012.