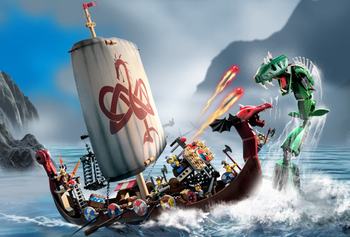 Yo ho, yo ho, a viking's life for me!
LEGO Vikings is a LEGO theme based upon the classic depiction of vikings, released in 2005-2006. Rather than doing the usual pillaging and plundering, these vikings instead go hunting for treasure, bringing them in conflict with a variety of mythological Norse beasts.
Advertisement:

Compared to some of its contemporary LEGO themes, Vikings was very light on plot, with some of the only story provided in a short LEGO Brickmaster Magazine comic. Whenever the magical mists envelop the vikings' land, they are attacked by monsters, leading them to seek the source of the mist and put an end to the monster attacks.

This toy series contains examples of: