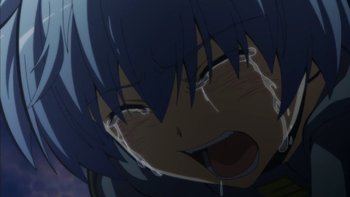 You were the one who understood us far better than anyone in this world - your lessons from now on and forever will be our guidepost...
"A brother and sister separated their whole lives! What a cruel fate! Waaaah!..."
— Koro-sensei's Weakness #14: Hackneyed plot developments make him cry.

WARNING: Spoilers Off applies to Tear Jerker pages. All spoilers are unmarked.