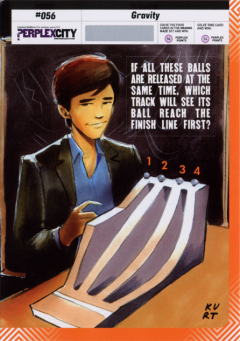 A card from season 1. The answer is 4
And Gyvann said, "Doubt not that the Cube speaks or that its voice is heard."
- Text translated from the green leitmark
Advertisement:

Perplex City is an Alternate Reality Game by Mind Candy which ran for over two years starting in April 2005. The titular metropolis exists in another dimension with connections to Earth and has slightly better technology and a society based around puzzles. One of their major artifacts, the Receda Cube, was stolen and hidden somewhere on Earth. Lacking the ability to send people to retrieve it, the citizens of the Perplex City Academy formed a team to recruit people from Earth to find and return the Cube.

Perplex City may be the ARG which has appeared in the most forms of media during its run. The primary connection between the city and Earth was via puzzle cards, which were sold in randomized packs. The cards had clues hidden on them, as well as a code to enter online to earn points for solving the actual puzzle. There was also the obligatory website, which had (in addition to basic information) a number of hidden URLs and live online events. The game also appeared in newspapers, on television and radio, on multiple telephone lines for players to call, at a live concert and on a music CD.

The prize for finding the cube was £100,000, awarded to a player in February 2007. Additionally, players could earn leitmarks (which took the form of small rubber pins and icons on a player's profile) for solving a certain number of cards or for other achievements.

A second season, which was to involve players assisting one of the characters solve a murder mystery, was repeatedly delayed, and then cancelled when much of the development staff resigned. Perplex City was repurposed as a general puzzle-solving website, We Love Puzzles,

and Mind Candy is, at the time of this writing, selling cell phone charms with an MMORPG attached.

This alternate-reality game provides examples of: