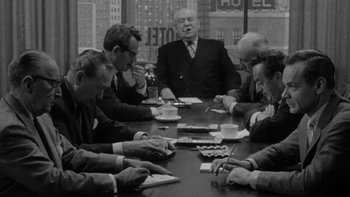 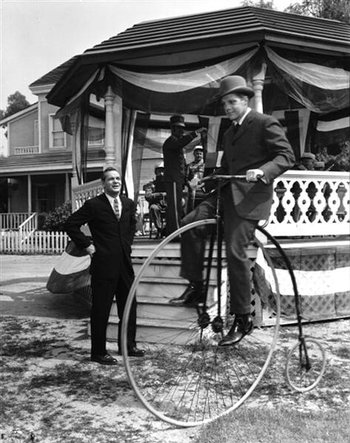 ...or can he?
Rod Serling: "This is Gart Williams, age thirty-eight, a man protected by a suit of armor, all held together by one bolt. Just a moment ago, someone removed the bolt, and Mr. Williams' protection fell away from him and left him a naked target. He's been cannonaded this afternoon by all the enemies of his life. His insecurity has shelled him, his sensitivity has straddled him with humiliation, his deep-rooted disquiet about his own worth has zeroed in on him, landed on target, and blown him apart. Mr. Gart Williams, ad agency exec, who, in just a moment, will move into the Twilight Zone - in a desperate search for survival."
Advertisement:

Gart Williams (James Daly) works for an advertising agency, a job which he is ill-suited for. After his young protege fails to show up for an important business meeting, sending a telegram that he'll be working elsewhere (and taking a $3 million automobile deal with him), Gart is reprimanded by his boss. He's quick to snap back, but instantly regrets it. On a train ride back home, he dreams of arriving at a place called Willoughby, a small town stuck at summer in 1888. Before he can properly explore the place, he awakens back on the train.

Back home, Gart gets into an argument with his wife Janie, who's fed up with how sensitive and emotional he is. Gart hasn't lost his job, since he's still tied to a few deals that his boss would hate to lose, but he is tired of the masquerade he must pull off every day to succeed in the world. He realizes that he'd truly be much happier in a place like Willoughby, though Janie derides him for wanting to give up a profitable job to become "Huckleberry Finn". The next time Gart rides the train, he's told that there's no such place as Willoughby by the conductor, but still dreams of it again. He once again awakens before he can explore it, however, and vows to actually enter Willoughby the next time.

Gart's next day at work is horrible; he has a breakdown due to stress, and when he attempts to call his wife for reassurance, she is of no help at all. On his very next train ride, he again dreams of Willoughby, and purposely abandons his briefcase in order to leave at the station before the train departs. He's immediately welcomed by the townsfolk, and he walks into town as an elderly conductor checks the clock...which immediately transitions to a younger conductor's lantern. He and the rest of the train staff are discussing the fate of Gart Williams, who from their perspective, leapt from the train while shouting about Willoughby and died the moment he hit the ground. His corpse is carried into a hearse, and on its back door is written the following: Willoughby & Son Funeral Home.

Rod Serling: "Willoughby? Maybe it's wishful thinking nestled in a hidden part of a man's mind, or maybe it's the last stop in the vast design of things - or perhaps, for a man like Mr. Gart Williams, who climbed on a world that went by too fast, it's a place around the bend where he could jump off. Willoughby? Whatever it is, it comes with sunlight and serenity, and is a part of The Twilight Zone."
Advertisement:

A Trope at Willoughby: