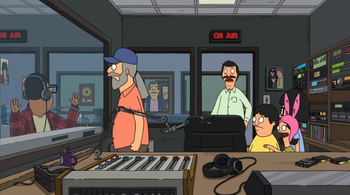 "WE ARE LIVE, PEOPLE!"
"Crying baby then sad trombone?! Are you Mozart?"
—Gene

Bob gets dragged into his favorite DJ's attempt to get back in the spotlight by hijacking his old radio station, while Linda tries making pie after a failed attempt to sell Bob on sweet potato fries.

Example of:
The Last DJ