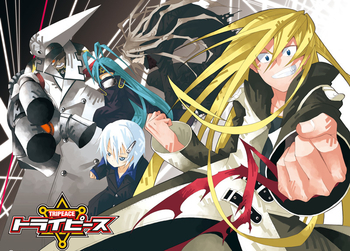 Nana is a young boy who suffers from extreme amnesia and thus, cannot remember anything from his life beyond recently. Even so, he still enjoys a peaceful life. However, after the town he's staying in is attacked by The Empire and he witnesses the deaths of three children, he takes it upon himself to stop war and protect the people he cares about.

At first, despite his incredible strength, it seems that he won't be able to do anything, but he is saved when the freedom fighters of the organization Tripeace get involved. They proclaim their goals to rid the world of all war, even if it means getting involved in armed combat themselves. Nana, amazed at Tripeace's heroic goals and the incredible strength of its members, decides that in order to achieve his dream of creating a world without war, he'll join Tripeace and fight with them!

Through an odd chain of events that includes Nana cross dressing and pretending to be a member of Tripeace, he's eventually allowed to join their group. Now follow Nana and friends as they work to end conflict and bring peace to their world in the name of peace, love, and the third law!