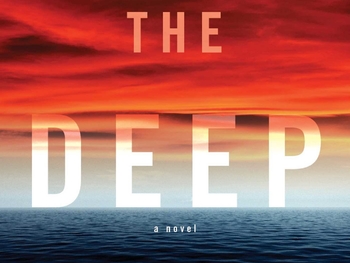 There's a reason nothing lives down here. Or nothing should.
Advertisement:

The Deep is a 2015 Science Fiction Horror novel by Nick Cutter (author of The Troop).

In the near future, humanity faces a terrible disease nicknamed "the 'Gets," a condition that causes people to forget little things like anniversaries, then big things like breathing. Rumored Mad Scientist Clayton Nelson believes he's found a miracle cure in the unlikeliest place: the bottom of the Marianas Trench, eight miles below the surface of the Pacific Ocean. Clayton establishes a cutting-edge research lab in the trench... and then ceases communicating with the surface world.

Enter his brother, veterinarian and all-around Nice Guy Luke Nelson. Luke is recruited to go down to Clayton's lab, the Trieste, and persuade him to return with his research. Accompanied by tough, kindhearted Navy sub pilot Alice "Al" Skyes, Luke descends into a cold, sunless world under the water... and it isn't long before he discovers that the horrors of the 'Gets are nothing compared to what lies waiting in the deep.

Not to be confused with The Deep or the graphic novels it's adapted from.

The Deep contains examples of: