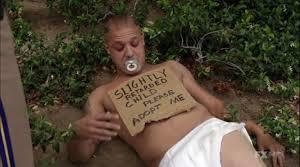 He's late for his 8 o'clock feeding.

Jax's completely serious delivery as well as Chibs, Half Sack and Happy's absolute lack of hesitation is priceless.