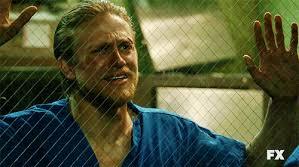 Because nothing moves you to tears more than watching your best friend being beat to death and not be able to do anything about it.