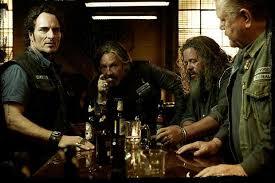 "If you ever want to own a top rocker, prospect, you'd better bring a strong liver to the table, sharpish."

Take a shot every time: